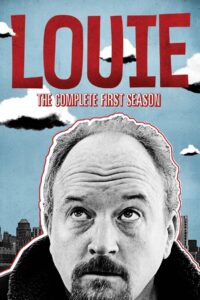 The first season of the American television comedy series Louie premiered on June 29, 2010 and concluded on September 7, 2010. It consisted of thirteen episodes, each running approximately 23 minutes in length. FX broadcast the first season on Tuesdays at 11:00 pm in the United States. The season was produced by 3 Arts Entertainment and the executive producers were Louis C.K., Dave Becky and M. Blair Breard. Louie was created by Louis C.K., who serves as the series’ sole writer and director. C.K. stars as a fictionalized version of himself, a comedian and newly divorced father raising his two daughters in New York City. The show has a loose format atypical for television comedy series, consisting of largely unconnected storylines and segments that revolve around Louie’s life, punctuated by live stand-up performances. The season received critical acclaim from critics.